Judy Watson is an artist whose Aboriginal matrilineal family are from Waanyi country in north-west Queensland. She co-represented Australia in the 1997 Venice Biennale, was awarded the Moët & Chandon Fellowship in 1995, the National Gallery of Victoria’s Clemenger Award in 2006 and, in the same year, the Works on Paper Award at the 23rd National Aboriginal and Torres Strait Islander Award. In 2011 her exhibition waterline was exhibited at the Embassy of Australia, Washington, DC. Her work is held in major Australian and international collections including: National Gallery of Australia; all Australian State Art Galleries; Taipei Fine Arts Museum; St Louis Art Museum USA; The British Museum, London; Museum of Archaeology and Anthropology, University of Cambridge, UK; Library of Congress, Washington, USA; Kluge-Ruhe Aboriginal Art Collection, University of Virginia, USA; as well as important private collections. She has exhibited widely over the past twenty years. Judy Watson blood language, a monograph by Judy Watson and Louise Martin-Chew, was published by The Miegunyah Press, Melbourne University Publishing in 2009.

This is a work that has time travelled. It has had its genesis in Bhopal India in 1994, ten years after the Union Carbide factory gas leak tragedy where thousands of workers were killed and thousands in surrounding shantytowns, incapacitated. The muslin and pigments used in this work were sourced during Judy’s travel and residency there. Then the work travelled to New York City in 2000 where Judy took part in the Green St studio residency program. It was here pregnant with Otis, Judy added the spine in the right of the painting. The spine references many things, particularly the hope and desire for strength and resilience. 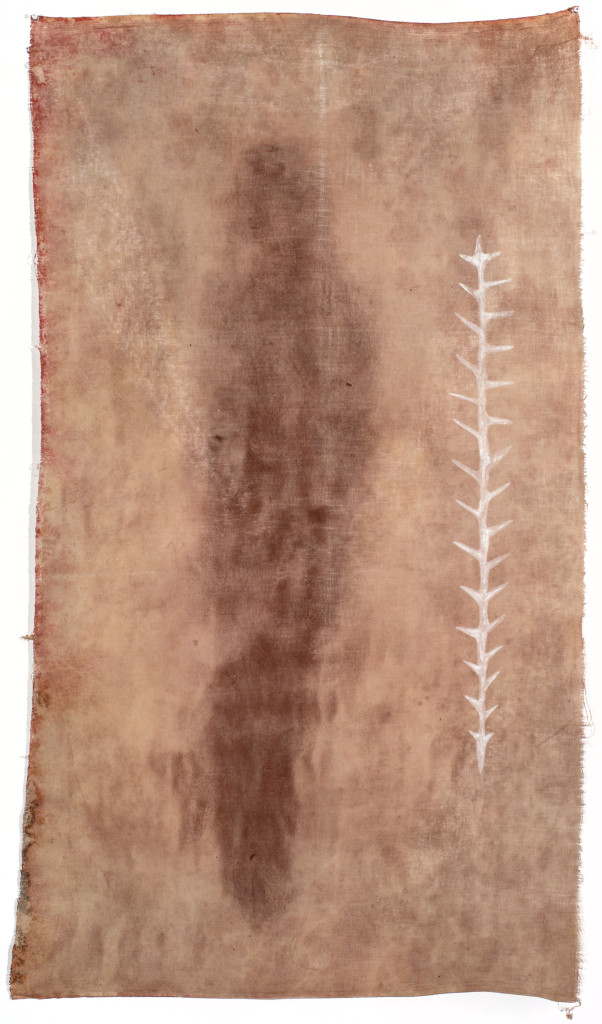 
Courtesy of Milani Gallery
view at Avid Reader
193 Boundary St
West End
Bidding Is Over!
The work has sold.