Sam Cranstoun was born in 1987 in Brisbane, Queensland, where he still currently lives and works. In 2010 he graduated with a Bachelor of Fine Arts (Honours) from the Queensland University of Technology. Cranstoun is a conceptual artist working across a variety of media including painting, drawing, watercolour, mixed media and sculpture. He is widely recognised for his realist portraits of historical and contemporary subjects with a subtle surrealist twist.

Cranstoun was a finalist in the Archibald Prize in 2007 for his portrait of his father, Peter and again in 2009 for his portrait of actor Gyton Grantley, Gyton. Selected group exhibitions include Tokyo Downtown Cool Media Festival, Tokyo, Japan (2010), The Young Collectors, Ryan Renshaw Gallery, Brisbane (2011) and Brisbane Emerging Art Festival, Metro Arts, Brisbane (2012). He had two solo shows in 2011, The Divine Right of Hands, Metro arts, Brisbane and Oil!, Boxcopy, Brisbane. In recent years he has had two solo exhibitions at Milani Gallery, Brisbane, Fox River Rising in 2013 and Memphis, TN. in 2014. His work is held in a number of private collections as well as the University of Queensland Art Museum, Queensland University of Technology Art Museum.

This is an image originally sourced from the internet of the Kippumjo or ‘Joy Division’—Kim Jong-un’s personal female ‘entertainment’ troup of 2000 young women. The image, rendered in graphite by Sam Cranstoun, looks like it is replicating an already retouched image. Known for his interest in rearranging history and pop culture, or recovering histories from unlikely sources, Sam works with the absurdly silly, or the very strange—all drawn from actual recorded moments. 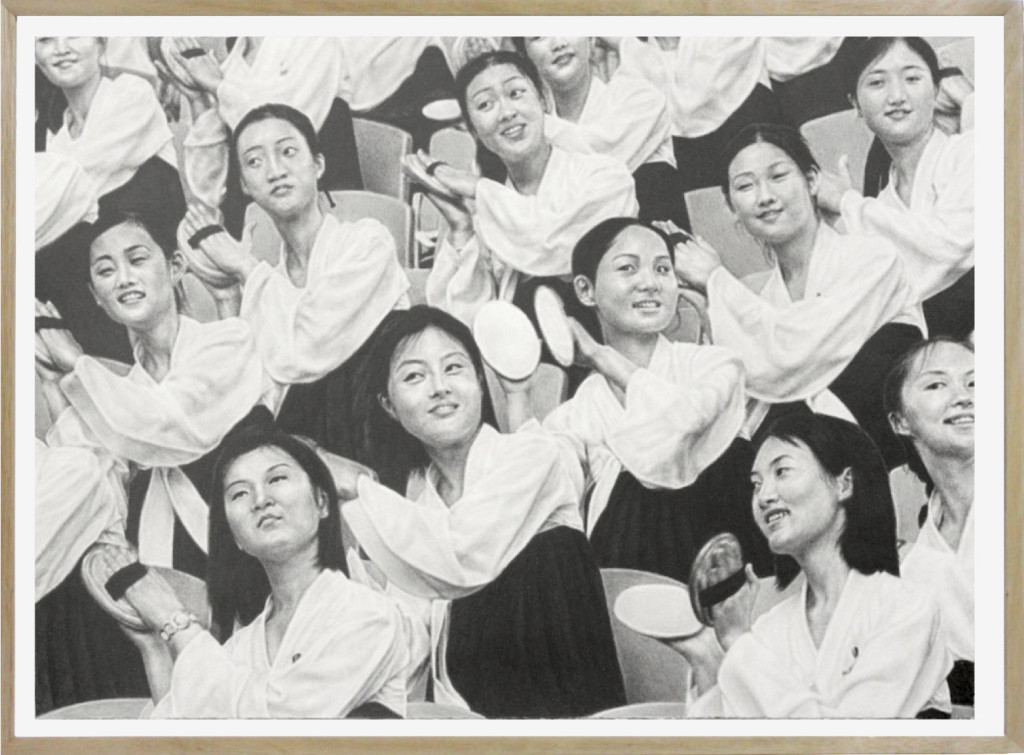 Love (Will Tear Us Apart [Again])
2013
Graphite on paper
48x63cm (framed)
Courtesy of Milani Gallery
view at Egg Records
79 Vulture St
West End
Bidding Is Over!
The work has sold.