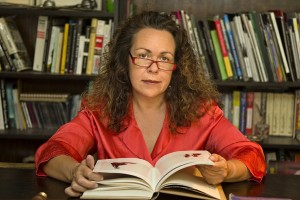 One of Australia’s most significant visual artists, Fiona Foley has a heroic ability to communicate powerful ideas and concepts through elegant, understated and sometimes humorous artistic expressions. Born in 1964, Fiona has lived in Sydney and Brisbane but now works and lives in her home town Hervey Bay. In her final year at Sydney’s College of Fine Arts, a sculpture of Fiona’s Annihilation of the Blacks (1986) was acquired by the National Museum of Australia. Since then, Fiona’s works have been regularly collected by art museums around Australia and the world such as the British Museum and the National Gallery of Australia, as well as corporate and private collections.

Fiona Foley works across many media uncovering or recovering Aboriginal histories. As a Badtiala woman of Fraser Island, Fiona in Signpost 1 references the Badtiala native title claim, which was tied up in red tape for fifty years until awarded in late 2014. In this series of photographs taken on Fraser Island, Fiona considers some of the traces of European presence. Here the ruins, once part of a loading pier built to move the island’s felled hardwood timber to the mainland, serves as a site of protest. Layers of red tape symbolize the collective effort by Australian governments to stymie the Badtiala land claim. When this work was undertaken the Badtiala still had eight years to wait.